The UK and the European Union

Charles
Grant
in
WeltTrends
(10.07.2013)
Für den Fall seiner Wiederwahl kündigt Cameron ein  Referendum an. Verlässt Großbritannien dann die EU? Zwei Jahre vor der nächsten Wahl verhält sich der britische Premierminister David Cameron zwar taktisch klug für sein politisches  Überleben, aber zugleich sehr riskant, für sich und für Europa.
Seine europhoben Tories fordern den Austritt aus dem Staatenverbund, zumindest aber Verhandlungen über nationale Sonderregelungen. Damit setzt er die EU unter erheblichen (zusätzlichen) Druck. Aber geht Camerons Rechnung auf? Schätzt er die Position Deutschlands richtig ein?
David Cameron has promised that if the Conservatives win the next election, they will renegotiate the terms of Britain’s EU membership and then hold an in-out referendum before the end of 2017. In his long-delayed speech on Britain and the EU, he pledged to campaign for a Yes vote “with all my heart and soul”. The speech contained much that is sensible. But its implicit message to Britain’s partners was: “Give us what we want, by the deadline that we specify, or we may well leave the EU.” Many other Europeans consider that not far short of blackmail. Given that Cameron cannot get what he wants without the co-operation of the other member-states, the strategy he has adopted is risky. The speech made many optimistic assumptions and was riddled with ambiguities. Cameron had to promise a referendum in order to maintain control of his own party. Had he failed to do so, the Conservatives’ most eurosceptic backbenchers—who want a referendum to propel Britain out of the EU—would have become even more truculent and rebellious than they are already. And some Conservatives who want to stay in the EU believe that only a referendum pledge can undermine the surge of support for the United Kingdom Independence Party, which threatens to deprive the Tories of many seats at the next general election. But although the necessities of party management underlay what Cameron said, the speech was much more thoughtful than many pro-Europeans expected. Cameron was right to say that much in the EU needs to change; that the Union should accept the principle that powers can flow not only from member-states to institutions but also the other way, too; and that national parliaments should become more closely involved in EU decisionmaking. Cameron stated very clearly the economic and strategic benefits of EU membership for the UK. And he hit on the head the silly argument made by some eurosceptics that the Norwegian and Swiss models of association—whereby they have access to parts of the single market, without being able to vote on its rules—could be suitable for Britain.
Lesen Sie weiter im PDF.
Politik 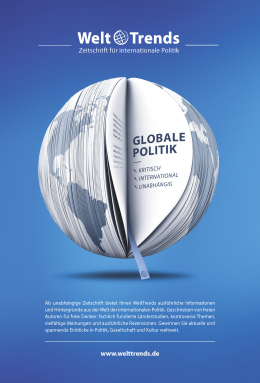